Via the organisation’s Facebook page and Twitter profile, each day they are publishing a special banner to inform the public about the history of Roma people in Europe, and the situation faced by European Roma today. They are running this social media campaign with the hashtages #8deAbril and #queseacabelsilencio (stop the silence). 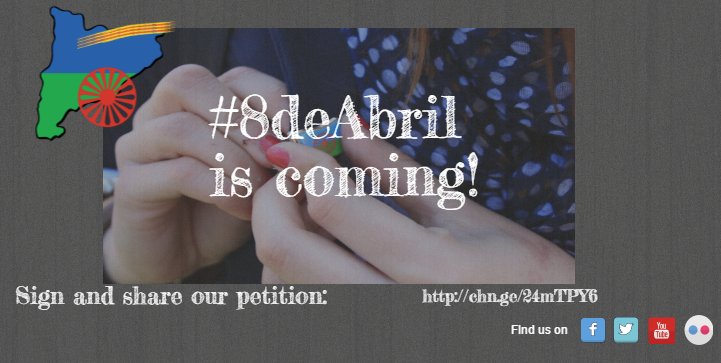 They are also organising a petition to ask Google to introduce a “Google Doodle” to mark International Roma Day on 8 April.

“We want to stop the silence on the reality of the Romani people and make us visible for our culture and our history, because too often on the media the only things related to Roma are stereotyped news.” FAGiC explained to UNITED; “And how to ensure maximum visibility? Not everybody is on social networks, but almost the 97% of web surfers use Google, so we thought: let’s ask Google for a doodle!

“This will be a very powerful medium to promote the International Roma Day, which is not only a day to celebrate our culture but also to raise awareness about all the discrimination that Romani people have suffered and still suffer.

“For our community, to have a doodle on Google would mean finally being visible for something we are proud of! It would mean that finally people will start to talk about Romani culture, to know a bit more of Romani history. This doodle would enable us to raise awareness and spread the word! Already more then 1000 people have signed the petition, and we have recieved a lot of message of support for our cause, with a lot of other NGOs sharing the petition. Even if we will not achieve the aim, we are satisfided that we have done a step more forward to make this day more visible and our hope is to do better next year.”

Like other Roma NGOs in Catalonia and Spain, FAGiC will also mark 8 April with a public action; in Barcelona, the action will start outside the Catalan Parliament at 10.00, and will be followed by a Flowers Ofrenda on the Besos river. You can sign the FAGiC Roma Day petition here. Click here to see a video [in Spanish] about Roma Day. FAGiC are also running a social media campaign via their Facebook and Twitter pages.